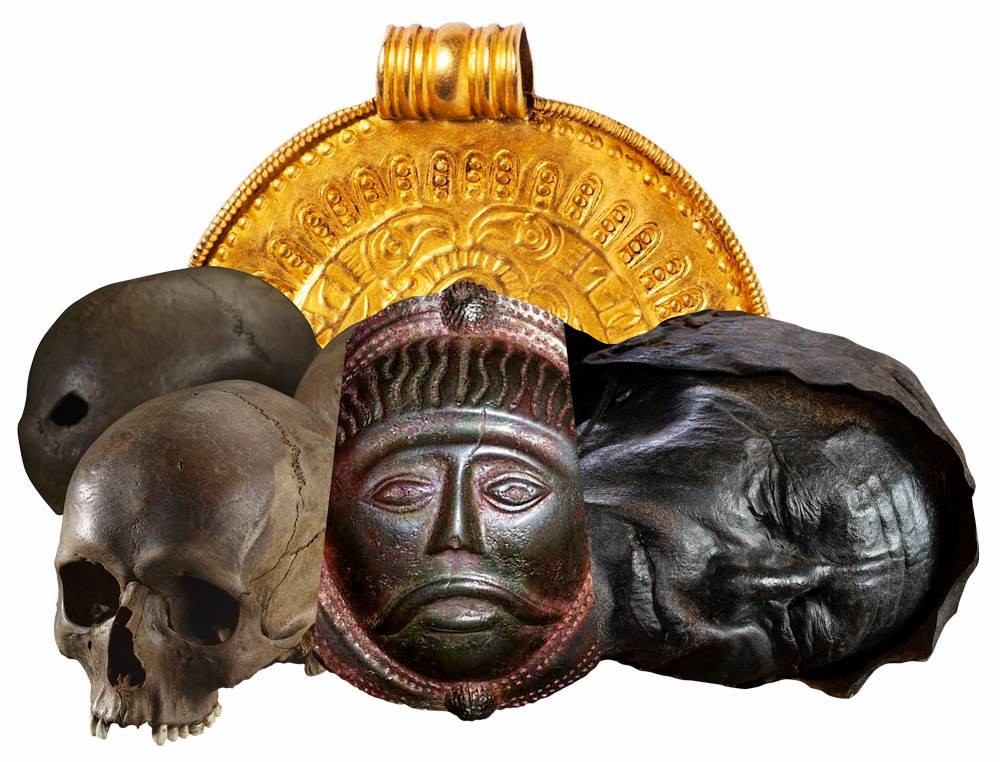 Scattered across the landscape are traces from the fascinating history of Central Jutland. Some are still there to be seen, while others are hidden underground.
The traces are everywhere, from the open West Jutland landscapes and the rough coastline, across Central Jutland's wooded Søhøjland ’Lake District’ to the fjords, rolling hills, and cliffs on the nose of Djursland. At all times and in all places man has lived and left his mark.

Museum Silkeborg is located at three different addresses: The Hovedgården Manor House and the Papirmuseet Paper Mill Museum in Silkeborg; and the Blicheregnen (Steen Steensen Blicher's native area) in the village of Thorning. The collection at Hovedgården included bog finds and corpses of victims from the Iron Age with exhibits such as the museum's world-famous Tollund Man and the contemporary Ellingkvinden. They were both hanged and lain in a sacred bog as offerings to the gods approximately 2,300 years ago.

One theme at Blicheregnen in the village of Thorning is the Battle of Grathe Heath where King Valdemar was victorious over King Svend who was killed and is presumed to be buried at the Grathe Chapel. The location of the chapel was only a few kilometres from Blicheregnen, and the museum is exploring og portraying the location and incident in 1157.

Tollund Man is an icon. One of the world's best-preserved bog bodies, and by any comparison the most beautiful. The peaceful, well preserved face gives the impression of a sleeping person who can wake up at any moment. Other bog bodies are on display, but Tollund Man is a truly intense encounter.

He was hanged 2,400 years ago, and wearing only a leather belt and a hat he was placed in an old peat bog as an offering to the gods of the bog. It remains a mystery why he was sacrificed, and it is one of nature's great mysteries that this body has been preserved through more than 2,000 years. Tollund Man is exhibited in Museum Silkeborg, Hovedgården, Hovedgårdsvej 7, 8600 Silkeborg.

Elling Woman is a bog corpse found in the same peat bog as Tollund Man. She lived and died at the same time as Tollund Man, some 2,300 years ago, and ended up sharing his fate. She too was hanged and placed in the peat bog as an offering to the gods. She was wrapped in two capes of animal skin, held together with a woven wool belt.

The peat bog did not preserve Elling Woman quite as well as Tollund Man, however she has the most incredible, well-preserved hairdo; a magnificent example of Iron Age hair styles.

Why she had to die, to be sacrificed to the gods, remains a mystery. Elling Woman is exhibited in Museum Silkeborg, Hovedgården, Hovedgårdsvej 7, 8600 Silkeborg.

In the Bjældskovdal peat bog, which is a part of the Bølling Sø lake, sacrificial ceremonies and peat-digging took place in the older Iron Age. This place saw, around 400–300 BC, the sacrifice of at least 3 people, two of whom are on display today at Museum Silkeborg, at Hovedgården. Towards the end of the Bronze Age, a plank road was built across the bog to walk dry-shod across it.

Today you can walk all the way around the Bølling Sø lake, and, via a wood-paved road, pass the location where the Tollund Man was found. The area has been left to nature, and the bog is slowly expanding once again. Visiting Bjældskovdal can be a very atmosphere-filled experience and – when the mist is hanging low – both beautiful and scary at the same time.

In 1952 peat-diggers found a body in the Nebelgaards Mose peat bog. Professor P V Glob, who was sent for, concluded that it was the body of a prehistoric man; probably an Iron Age man. He was named the Grauballe Man. The Grauballe Man was taken to Aarhus where he was examined and preserved. The examination showed that he had been killed by having his throat cut, thus being linked to other finds such as the Tollund Man and the Ellingkvinden woman, and, like them, being seen as having been sacrificed. The Grauballe Man is one of Moesgaard Museum's biggest treasures which today is on display in the exhibition. Today the peat bog is a lake surrounded by trees.

This is the location of a chapel or a church in the Middle Ages where it is believed that Svend 'Grathe' was buried after the Battle of Grathe Heath. In 2015 Museum Silkeborg rediscovered the site of the chapel and the adjourning graveyard. The chapel is in many ways a mystery. It is not absolutely certain whether it already existed here at time of the battle in 1157, or whether it was built later, possible in honour of Svend 'Grathe'. Whether or not this is the case, this site can been seen as the starting point of the great period of the Valdemars, which was a time of prosperity for Denmark in the Middle Ages. 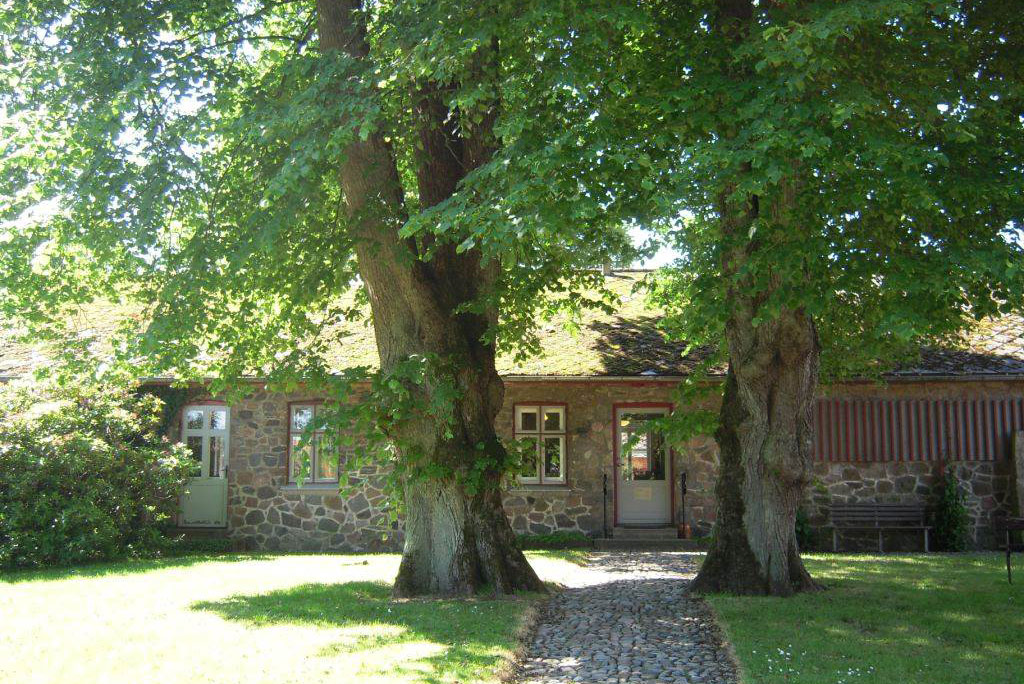 The Blicheregnen branch of Museum Silkeborg is situated in the crop storage buildings of the old Thorning vicarage. The church in Thorning, immediately across from the museum, was the first incumbency of the poet-pastor Steen Steensen Blicher. This is where he found the novella as his means of expression and wrote Diary of a Parish Clerk, one of his best known and most cherished works. The museum has a permanent exhibition about life on the Jutland moors during the 19th century.

The Battle of Grathe Heath, and the Grathe Chapel situated a few kilometres from the museum, are also explored at this museum. 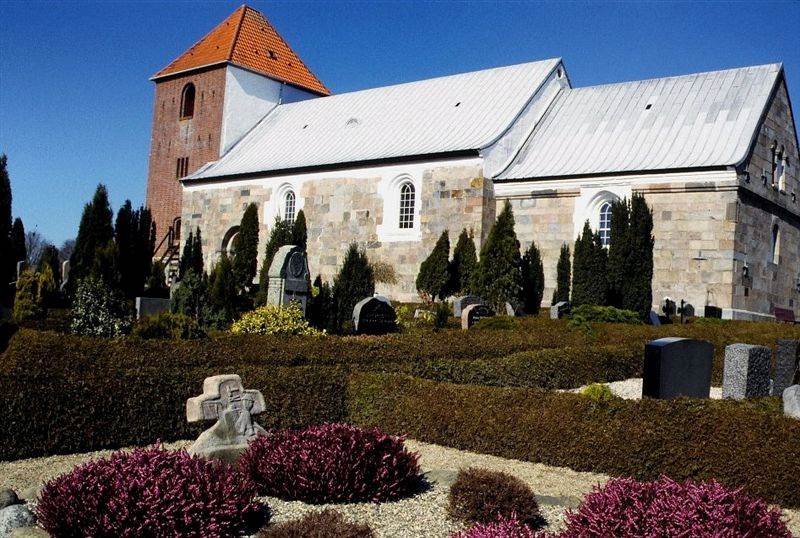 The church in Vinderslev is built of ashlar in the Romanesque style with a late Gothic tower. It stands beautifully and is well-built with fine details in granite. It has columned portals, facing both north and south, and is generally adorned with a large number granite figures and reliefs. The church vault is late Gothic. In the nave are frescos dating back to approx. 1510 depicting a wonderful world of uncanny creatures, including geese hanging a fox from the gallows. The lion-adorned font has beautifully modelled lion heads. In the cemetery are two crosses from a medieval grave. On one of them, the relief shows that the deceased was a master smith. 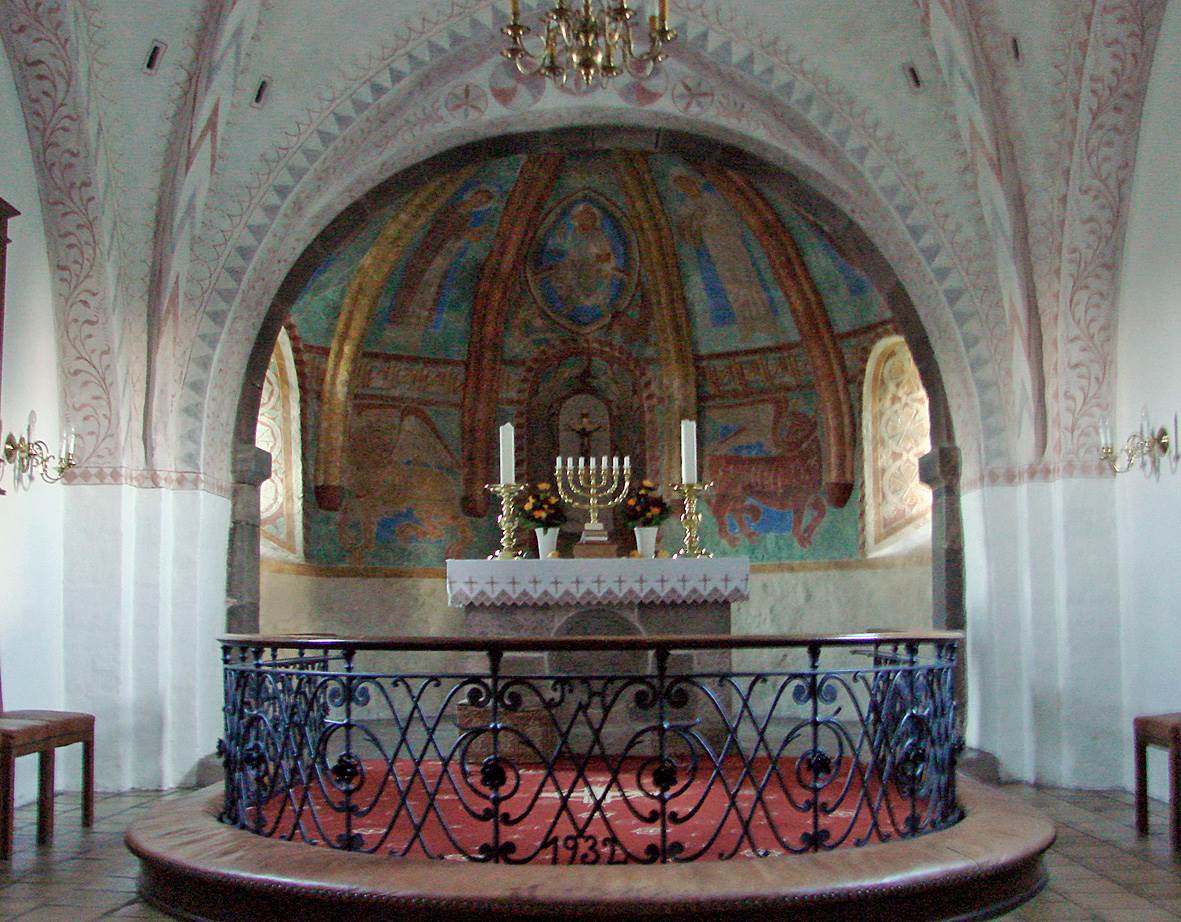 The church in Grønbæk is built of ashlar in the Romanesque style with a Gothic tower. The church, standing well-built and with an apse, is the only church in Jutland adorned with free-standing granite columns. There are also other fine details in granite, and the church is exceptional in terms of both size and quality. The choir is vaulted, and the original Romanesque frescos are from when the church was built in approx. 1225. The nave has a flat roof. The font, standing in the nave, is a rare Romanesque, fourfoil-shaped font made of red Öland 'marble', which is always filled with water. The corbelled chancel arch is adorned with a dragon with its tail held by a hand.

This was originally a Romanesque-style church which was rebuilt and extended using materials from the dismantled Ungstrup church in 1743.

The church in Thorning was the first incumbency of Steen Steensen Blicher. He was the vicar of the church during 1819–1824 when he lived at the vicarage across from the church. Today the successor to the vicarage is Museum Silkeborg, Blicheregnen. In the cemetary you can find the tombstone for Mads Doss (west of the tower), from the song by Steensen Blicher, and a monument for cuirassier Claus Vattrup (made famous in the Steensen Blicher novella about the horse Messingjens). 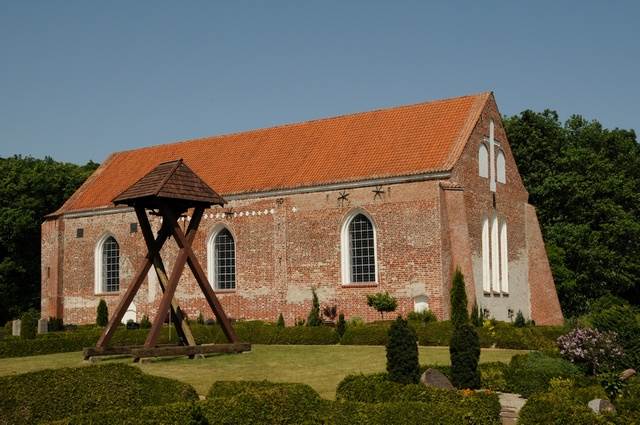 The church in Tvilum is the last remaining part of an Augustinian monastery, where the church once made up one of the monastery's wings. The monastery reached into what is today the cemetery. The church was built from 'monkstone' bricks, hand-made on site. The interior of the church is whitewashed, but there are still some remains of frescos to be seen, including a fresco of the coats-of-arms of King Valdemar IV.

The church is situated only some 200 meters from the Gudenåen river, and today has its own landing stage.

The wall of the cemetery still holds relict herbs from the days of the monastery.