In connection with stable isotope analysis of the femur and rib of Tollund Man it was decided to radiocarbon date the same samples; prior to this he was previously broadly dated to the 3rd-4th century BC. By using ultrafiltration, by averaging the new dates and an earlier AMS date of his skin, and by encountering a favorable interval on the calibration curve it was possible to obtain a calibrated age of 405-380 BC (95.4% confidence). This is an almost unprecedented accurate dating. To be able to date the death of Tollund man to within 25 years, instead of 200 years is simply fantastic. That enables us to link him to a more defined era. For instance can we state that he lived – and died – at the approximate same time as Socrates. This Iron age man lived and died when the western philosophy was in its making.

Monday October 17th 2016, Museum Silkeborg received a rather unusual phone call. “I have, in my possession, one of Tollund Man’s big toes. Would you like to have it at the museum?”

Yes please! A few days later the news hit the front pages. This was not just any toe, but Tollund Mans, so naturally it was a great story that the toe turned up in Nivå, Seeland. However, why was the toe missing and why had it been in the possession of the family Brorson Christensen for years? To explain that, we need to make a flashback to 1950.

Autopsied, and cut to pieces.

Tollund Man was found in Bjældskovdal on May 6th in 1950. In the block of peat where he lay, he was brought to the Danish National Museum, where conservator Knud Thorvildsen excavated him. Silkeborg Museum asked the conservators to preserve the body, so that it could be on display in Silkeborg Museum. Curator Therkel Mathiassen from The Danish National Museum declined. He thought that it would be too macabre to display a partly dissolved human body like that, and apart from that, nobody really knew how to preserve the body. Instead he proposed to try to preserve the eminently preserved head, and if it was done successfully, Silkeborg Museum could display that.

After the excavation, an autopsy was made at Bispebjerg Hospital, at the end of which the body was cut up in several parts. The head was sawed off, low on the neck, and was later, very successfully preserved by conservator Børge Brorson Christensen and conservator Knud Thorvildsen. In June 1952 the head was returned to Silkeborg. At that point, nobody seemed to worry about the other body parts. For many years, the head, together with the cap, the hanging noose and the leather belt, was the jewel of the collection.

Tollund Man as he is displayed today at Museum Silkeborg

In the 1980ies, museums director Christian Fischer started to search for Tollund Man’s body. Bit by bit he succeeded in localizing the missing body parts. Some parts were stowed away at the Danish National Museum, others were found in The Anatomical Institute. Only the internal organs and the big toe from the right foot, which had clearly been sawed off, remained missing.

”This toe was part of my childhood”

Birte Brorson Christensen told that, at some point, her father had glass jar with a blue fluid and one foot, standing on his desk. He was a scientist, and he researched in different methods of preservation. He probably cut off the toe to see how the experimental method worked, and kept it in order to see whether it would change throughout time.  She also remembered that he used to keep it in his housecoat, where he also kept small parts of the Viking ships from Skuldelev and other stuff he had worked with. When dining, he would often place the things from the pocket on the tablecloth while eating.

After B. Brorson Christensen had died, it remained in the possession of his widow, and after her death, it was discovered once again.

Tollund Man's right toe "in sito" as it was found.

It is the right, right toe.

Shortly after the toe was handed over to Museum Silkeborg, both toe and right foot were cat scanned at Silkeborg Hospital, to establish whether it was the right, right toe. It was a perfect match, and that indicated that the toe had been sawed off after the preservation process, exactly as Birte Brorson Christensen had told.

Now nearly all body parts are in the museums possession. Should anyone, however, come across a mysterious jar containing what might his internal organs, we would be most interested to hear from you. 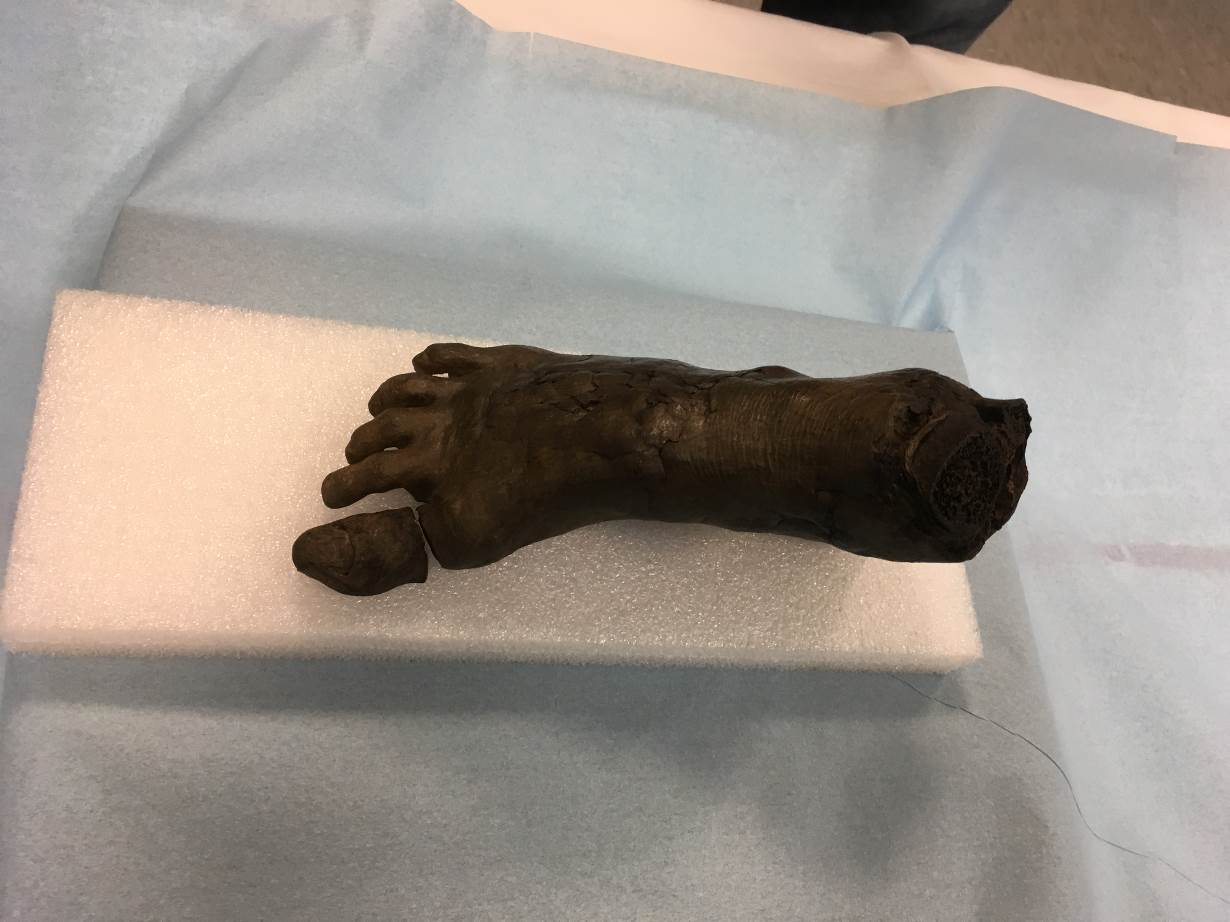 Tollund Man has been to France

Tollund has returned from a medical investigation in France

For Tollund Man, going to France wasn't just holiday. The reason for his first trip abroad was, that he had to have his feet scanned. During the work on a tv-documentary in december 2014, the French anthropologist Dr. philippe Charlier discoveret some "dots" on his feet that nobody had ever remarked before. They could be a sort of warts, and subsequently he - or rather his feet - was invitet to Paris for a medical examination in a micro CTscanner. The feet were also scanned in a socalled OCT scanner. The  CT scann vas so accurate that it scans 115 times per milimeter, and that is enough to create a digital 3D model of the feet. The OCT scanner makes a sort of non-destructive spektral analysis, that can reveal small variations in metabolism in the tissue. The hope is to to be able to determin wether he had warts or not. Apart from the potential warts, we will also examine his arteries to see if if he had any signs of arteriosclerosis. It is interesting - but might also be useful in the search for a cure - to se when in history or prehistory, the different diseases of mankind appears.

After the investigations in Paris, Tollundmanden and his feet were presented at the 6th internationale congres in Pathographi in Nancy.

Tollund Man has been at the photographer

In May 2013, Tollund Man was taken out of his secure display case to be photographed. There are constantly people from all over the world who are looking for photos of him, and eventually the old pictures becomes “worn” after much use. For this reason, a new set sometimes has to be made. Photographing Tollund Man is a little more complicated than others when we go to the photographer. Follow the work on the preparations and see the photo session here  http://www.youtube.com/watch?v=nlyKtY7F8hE&feature=youtu.be 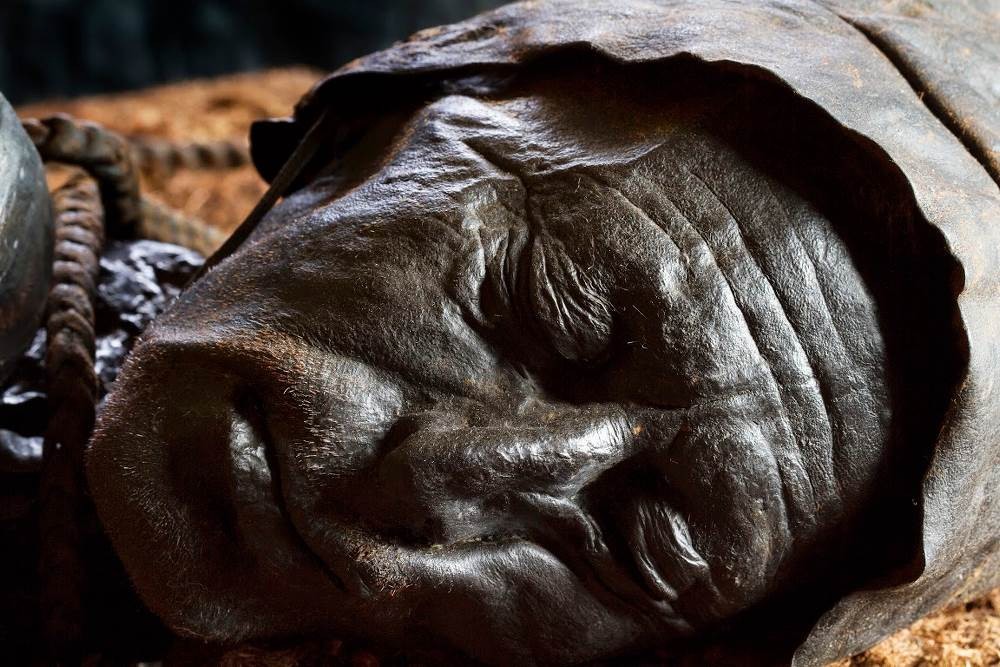 Tollund Man is getting DNA tested

In June 2013 scientists from the Natural History Museum, Centre for GeoGenetics took out samples from Tollund Man to see if there is any DNA preserved in his bones or soft tissues. If there is, will he, along with approximately 100 other ancient Danes, help to map the Danish genome and thus help to reveal from where we originated. You can read and hear more about the exciting genome project here http://www.science.ku.dk/presse/nyhedsarkiv/2013/tollundmanden-silkeborg-dna-proeve/